Palazzo Venier dei Leoni was commissioned by the Venier family in 1749 to the architect Lorenzo Boschetti, whose only other known building in Venice is the church of San Barnaba. However, historical events related to both the family and the city prevented the palazzo from being completed. Only the first of its originally planned five stories was built. Its classical façade would have matched that of Palazzo Corner, on the opposite side of the Grand Canal, with the three arches on the ground floor extending through both the ‘piani nobili’ above. The original project is documented in two engravings by Giorgio Fossati and a wood model by architect, Domenico Rizzi, who oversaw the construction, all held in the Museo Correr, Venice.

Although it is said that a lion was once kept in the garden, the name is likely to have arisen from the lion heads in Istrian stone which decorate the façade at water level. The Venier family, who claimed descent from the gens Aurelia of ancient Rome (of which the emperors Valerian and Gallienus were members), were among the oldest Venetian noble families. Over the centuries they provided eighteen Procurators of St Mark’s and three Doges, among them Sebastiano Venier, commander of the Venetian fleet under the command of John of Austria at the Battle of Lepanto (1571), and later Doge (1577–78). 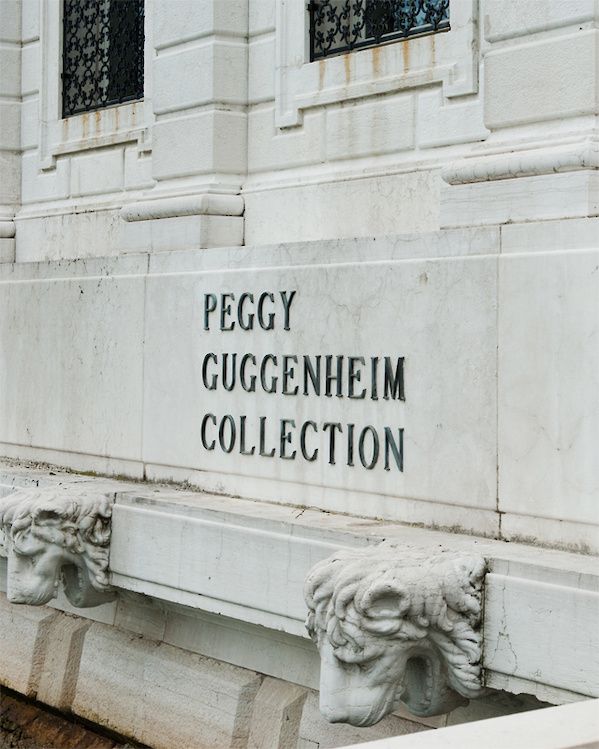 Late in the 19th century the palazzo and its garden was acquired by the Levi family. In the following decades the abandoned construction site began to take its present shape. From the 1910s to 1924 it was rented by the Marchesa Luisa Casati Amman, a wealthy heiress who was muse and model for numerous artists, including Giovanni Boldini, Augustus John, Man Ray and Paolo Troubetzkoy, and hostess to the Ballets Russes. In 1924, it was bought by the Hungarian businessman and art collector, Baron Marzcell de Nemes, who unsuccessfully attempted to manage the property. In 1936, it was acquired by the Viscountess Doris Castlerosse on the condition that the authorities granted her permission to restore it. The current structure behind the original façade is, in fact, the result of the renovations carried out during that time.

It was in July 1949 that Peggy Guggenheim purchased the palazzo and the garden behind it, and made it her home for the following thirty years. In the same year she organized an exhibition of contemporary sculpture in the garden. After some interior remodelling and with the collection finally installed, in 1951 Guggenheim began to open her home and collection to the public, free of charge, three afternoons a week from Easter to November, and continued to do so until her death in 1979. Soon Guggenheim felt the need for more exhibition space. In 1951 she commissioned the architectural studio BBPR to expand the building, but she decided not to pursue construction. Instead, she opted for a more traditional, low garden pavilion, the so called ‘barchessa,’ along the perimeter of the garden.

Following Guggenheim’s death, the Peggy Guggenheim Collection opened in 1980 under the management of the Solomon R. Guggenheim Foundation, to which Guggenheim had given her palazzo and collection during her lifetime. Palazzo Venier dei Leoni’s low and wide façade, made of Istrian stone and set against the trees in the garden that soften its lines, forms a welcome ‘caesura’ in the stately march of Grand Canal palaces between the Accademia to the Basilica della Salute.