I dedicated myself to my collection. A collection means hard work. It was what I wanted to do and I made it my life’s work. I am not an art collector. I am a museum.

Peggy Guggenheim was born in New York on 26 August 1898, the daughter of Benjamin Guggenheim and Florette Seligman. Benjamin Guggenheim was one of seven brothers who, with their father, Meyer (of Jewish Swiss German origin), created a family fortune in the late 19th century from the mining and smelting of metals, especially silver, copper and lead. The Seligmans were a leading banking family. In April 1912, Peggy’s father died heroically on the SS Titanic during its maiden voyage from England to the United States.

After growing up in New York City, Peggy traveled to Europe in 1921. Thanks to her husband Laurence Vail (the father of her two children Sindbad and Pegeen, who was an artist), Peggy soon found herself at the heart of Parisian bohème and American expatriate society. Many of her acquaintances of the time, such as Constantin Brancusi, Djuna Barnes and Marcel Duchamp, were to become lifelong friends.

When in 1938, Peggy opened an art gallery in London, called Guggenheim Jeune, she was beginning, at 39 years old, a career which would significantly affect the course of post-war art. Her friend Samuel Beckett urged her to dedicate herself to contemporary art as it was “a living thing,” and Duchamp introduced her to artists and taught her, as she put it, “the difference between abstract and Surrealist art.” The first show presented works by Jean Cocteau, and the second was the first solo exhibition of works by Vasily Kandinsky in Great Britain, followed by solo shows given to Yves Tanguy and Rita Kernn-Larsen among others.

The first work that Peggy Guggenheim purchased for her collection was the sculpture Head and Shell (ca. 1933) by Jean Arp. In 1939, Peggy conceived “the idea of opening a modern museum in London,” with the British art historian Herbert Read as its director. The museum was to be formed on historical principles and a list of artists, drawn up by Read and later revised by Duchamp and Nelly van Doesburg, the widow of Dutch artist Theo van Doesburg, would become the basis of her collection.

My motto was Buy a picture a day and I lived up to it.

Peggy Guggenheim, Out of This Century (London: Andre Deutsch, 1979) 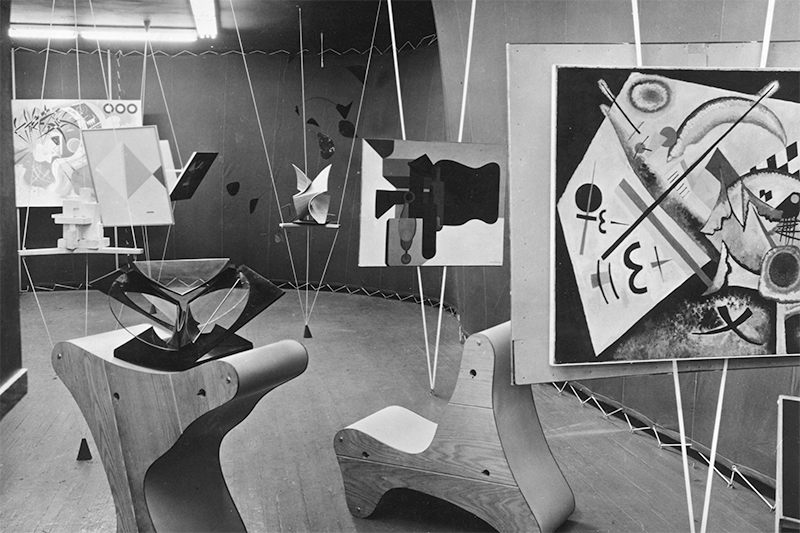 In 1939-40, having abandoned her project for a museum in London, Peggy relocated to Paris and busily acquired works for her collection, resolving to “buy a picture a day.” She purchased many masterpieces during these turbulent times, including works by Georges Braque, Salvador Dalí, Robert Delaunay, Piet Mondrian and Francis Picabia, among others. She astonished Fernand Léger when she bought his Men in the City (1919) on the day that Hitler invaded Norway. She acquired Brancusi’s Bird in Space (1932-40) as the Germans approached Paris, and only then decided to escape the city for the south of France.

In July 1941, Peggy fled Nazi-occupied France and returned to her native New York, together with her children and Laurence Vail (along with his second wife Kay Boyle and their children), as well as Max Ernst, who was to become her second husband a few months later.

New York: Art of this Century

In October 1942, Peggy opened her museum/gallery Art of This Century in Manhattan, at 30 West 57th Street. Designed by the Austrian architect Frederick Kiesler, Art of This Century consisted of innovative and visually compelling exhibition rooms and soon became the most stimulating venue for contemporary art in New York City. Of the opening night, she wrote: “I wore one of my Tanguy earrings and one made by Calder in order to show my impartiality between Surrealist and Abstract Art.” She produced a catalogue edited with André Breton, with a cover design by Ernst. Peggy exhibited her collection of Cubist, abstract and Surrealist art and held temporary exhibitions of leading European artists. She also showed the work of many unknown young Americans at the time such as William Baziotes, David Hare, Robert Motherwell, Robert de Niro Sr, Jackson Pollock, Richard Pousette-Dart, Mark Rothko, and Clyfford Still.

Opening this gallery and its collection to the public during a time when people are fighting for their lives and freedom is a responsibility of which I am fully conscious. This undertaking will serve its purpose only if it succeeds in serving the future instead of recording the past.

Press release on the opening of Art of This Century, New York, 1942

In 1943, Peggy gave Pollock the first of four solo exhibitions and a stipend. She actively promoted and sold his paintings, and commissioned his largest, Mural (1943) which she later gave to the University of Iowa. Peggy also organized two important exhibitions dedicated to women artists, as well as solo exhibitions of female artists including Irene Rice Pereira and Janet Sobel.

Pollock and his fellow artists were among the pioneers of American Abstract Expressionism. One of the sources of this movement was Surrealism, which the artists encountered at Art of This Century. More important, however, were the encouragement and support that Peggy, together with her friend and assistant Howard Putzel, gave to the members of the nascent New York avant-garde. Peggy and her collection thus played a vital intermediary role in the development of America’s first art movement of international importance.

Art of This Century soon became a center for all avant-garde activities. The young American artists ... started an entirely ‘new’ school of painting ... named Abstract Expressionism.

Peggy Guggenheim, Out of this Century (London: Andre Deutsch, 1979)

... I loved Europe more than America, and when the war ended I couldn’t wait to go back. ... On my way there, I decided Venice would be my future home. I had always loved it more than any place on earth and felt I would be happy alone there.

Peggy Guggenheim, Out of this Century (London: Andre Deutsch, 1979)

back to Europe: Venice

In 1947, Peggy decided to return to Europe, where she exhibited her collection for the first time at the 1948 Venice Biennale, in the Greek pavilion as the country was at civil war. Thus, the works of artists such as Arshile Gorky, Pollock, and Rothko were exhibited for the first time in Europe. The presence of Cubist, abstract, and Surrealist art made the pavilion the most coherent survey of Modernism yet to be shown in Italy.

Peggy acquired Palazzo Venier dei Leoni, an unfinished mid-18th century building on the Grand Canal, where she spent the rest of her life. In 1949, she organized an exhibition of contemporary sculpture. In 1950, she organized the first European exhibition of works by Pollock in the Ala Napoleonica of the Museo Correr in Venice. Subsequently, her collection traveled to Florence and Milan, and later Amsterdam, Brussels, and Zurich. From 1951, Peggy opened her house and her collection several afternoons a week to the public in the spring, summer and early autumn months. During her Venetian years, she continued to collect works of art and to support artists, such as the Italians Edmondo Bacci, Piero Dorazio, Tancredi Parmeggiani, and Emilio Vedova, as well as works by Marina Apollonio, Karel Appel, Francis Bacon, Kenzo Okada, Graham Sutherland among others. Peggy gave Tancredi a monthly stipend and a studio space in the basement of her palazzo, and organized a solo show in her home in 1954. In 1962, her adopted city nominated her an Honorary Citizen of Venice.

Peggy died aged 81 on 23 December 1979. Her ashes are placed in a corner of the garden of her museum. Since then, under the oversight of the Solomon R. Guggenheim Foundation, the Peggy Guggenheim Collection has become one of the finest museums of modern art in the world.

"To live in Venice or even to visit it means that you fall in love with the city itself. There is nothing left over in your heart for anyone else." (Peggy Guggenheim)

Art of This Century

Art of This Century is inseparable from Peggy Guggenheim’s claim to a place in the history of twentieth century art.

In 1943 Peggy Guggenheim commissioned Jackson Pollock a painting, which was to be the largest Pollock ever made.

In 1948 Peggy Guggenheim exhibited her collection in the Greek Pavilion, then ravaged by the civil war.

One of Peggy Guggenheim’s close friends was Djuna Barnes. They met in the early 1920s through Laurence Vail and their friendship lasted a lifetime.

Peggy Guggenheim met Samuel Beckett in Paris on the day after Christmas in 1937. He would make a mark in the history of twentieth-century literature and be awarded the Nobel Prize for Literature in 1969.

A thin, red thread connects the life and passions of two of the most eccentric U.S. collectors of the modern era, Isabella Stewart Gardner and Peggy Guggenheim. Both women were determined to make art the cornerstone of their lives, were in love with Venice, and shared the teachings of the famous Berenson.

In 1942 Peggy Guggenheim and Max Ernst welcomed John Cage and his wife Xenia Andreyevna Kashevaroff to their New York home. The time together was intense, though short-lived, and filled with art, music and parties.

During the winter of 1927, in the French coastal city of Saint-Tropez, the anarchist Emma Goldman began writing her autobiography, "Living My Life" (1931). The cottage she stayed in was provided by Peggy Guggenheim.

Villerville, Normandy in the 1920s: Peggy Guggenheim met James Joyce, one of the greatest writers of the twentieth century, author of an epic two-part linguistically impenetrable landmark work, "Ulysses" (1922) and "Finnegans Wake" (1939).

On October 20, 1942, Peggy Guggenheim inaugurated her New York museum-gallery, Art of This Century, designed by Frederick Kiesler, a multifaceted artist, architect, set designer, and sculptor who was best known for his utopian projects, exhibition installations, and the theory of Correalism.
We use cookies to deliver our online services and to provide more personalized services to you. Details and instructions on how to disable those cookies are set out in our Privacy Policy. By clicking “I Accept”, you consent to our use of cookies unless you have disabled them.
Read more